I am still making artworks related to Executive Order 9066, and just finished this piece for the “La Frontera” exhibition, being sponsored jointly by Velvet Da Vinci Gallery and Museo Franz Mayer in Mexico City.

Called Sweet Bird, the wooden bird pin was made by a Japanese American internee in one of the camps, believed to be Minidoka – it was given to me by John Grew-Sheridan:  his late wife, Carolyn, had received it as a gift.  Unfortunately we don’t know who made this pin, nor do we know who gave the pin to Carolyn originally.   I thought I would make a shrine for this sweet little bird.

Velvet Da Vinci is a great jewelry gallery in San Francisco and invited me to participate in this exhibition.  While my piece is does have a piece of jewelry in it, it cannot be removed from its permanent home. 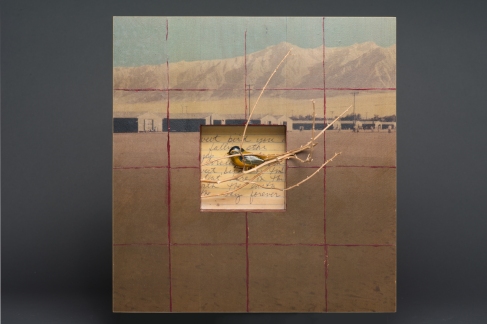